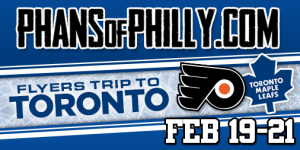 Get your passports ready because we are crossing the boarder once again! Last year we had 200+ Flyers fans in Montreal, and this year we will be looking to do the same in Toronto! Once again we will be teaming up with The Official Philadelphia Flyers Fan Club on this one! We are sure to have a large group!

Our comfortable deluxe motor coach buses will depart at 6:00 AM Friday February 19th from the South Philadelphia sports complex and from a location in New Jersey. We will have snacks and refreshments on the bus ride there, and make a couple rest stops to stretch the legs! Our buses will get into Toronto mid afternoon to allow the whole day. We will be staying at the 4-star Sheraton Centre Toronto Hotel. It is located in the heart of downtown Toronto walking distance to all of the entertainment, nightlife, restaurants, and shops. It is right down the street from the hockey hall of fame and the Air Canada Centre. The location is perfect! It is also 1 of only 8 hotels in Toronto that has a direct connection to the underground walkway. This walkway links to anywhere you would want to go in Toronto without having to deal with the weather!

Friday night we will be hosting a Flyers watch party to get your night started! They are playing the Canadiens that night, and we have you covered if you want to watch the game. What better place to take in the hockey game than at Gretzky’s Bar! This place is awesome. It is host of all of Wayne Gretzky’s personal hockey memorabilia. We will have great drink and food specials customized just for our group as we watch the Flyers game!

Saturday is game day and we have an awesome day planned! We have tickets to the hockey hall of fame if you would like to take a tour in the morning or the afternoon. Our pre-game party before the game will be one of our best we have ever done. It will be directly next door to the Air Canada Centre at Real Sports Bar & Grill. This is the spot to be before, during, and after all Maple Leafs games. This place is packed with Leafs fans, but we worked out something special. We have the WHOLE upper level of the bar only for Flyers fans! It wraps around the whole bar and overlooks everyone below. Maple Leafs fans won’t know what is going on when they are looking up at 100’s of Flyers fans chanting! We will have our own private area with our own bartenders and servers. There will be an awesome food layout for everyone to fill up before the game. The drinks will be on special for our group as well. After the party we will head into the game! Maple Leafs tickets are the hardest tickets to get in the NHL. It is one of the best arenas to experience a hockey game at. They had a 13 year sell-out streak, and there is over a 20 year wait on the season ticket wait list. Tickets to every game go for over $200! As always though we were able to secure an awesome block of upper level tickets for all of the Flyers fans to sit together. We only have a limited amount of tickets in the block, so book early if you want to be with the group! After we sell-out the tickets will be in the section over. Still near all of the Flyers fans though! Two sections of chanting Flyers fans in one of the best arenas in the league will be an awesome site to see!

After an awesome Saturday night and a Flyers win we will head back to Philly on Sunday. Our trips are usually 3 nights, but to keep the cost down for everyone we decided to experiment with 2 nights. We won’t be leaving right away Sunday though. The hotel is giving us a late check out. They will also hold everyone’s bags in their storage closet after the late check out. This will give everyone the whole day Sunday as well to explore the city or use their tour tickets to the hockey hall of fame. Our buses will leave Toronto at 6:00 PM, and we will be off into the night! This also gives people the option to go back to work on Monday instead of missing 2 days!

*ALL IT TAKES IS A $125 DEPOSIT PER PERSON TO HOLD YOUR SPOT ON THIS TRIP. THE REMAINDER OF THE BALANCE IS BROKEN INTO A VERY FLEXIBLE PAYMENT PLAN. SUBTRACT YOUR DEPOSIT THAT IS PLACED FROM THE PRICE BELOW, AND THAT IS YOUR REMAINING BALANCE!*

*If you have any questions please email Joe DiBiaggio Joe@phansofphilly.com*

*THE QUANTITY BOX IS FOR THE NUMBER OF DEPOSITS/PEOPLE YOU WILL BE PAYING FOR. IF YOUR GROUP IS PAYING SEPARATELY THEN ENTER THE NAMES IN YOUR GROUP IN THE BLANK BOX. *

Book a trip today! Email joe@phansofphilly.com with any questions
© Phans Of Philly 2017 | All Rights Reserved