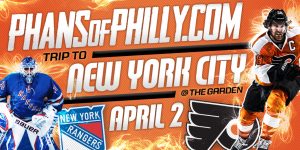 Here is your chance to experience a Flyers hockey game at the historic Madison Square Garden against division rival New York Rangers! This game could mean a lot for playoff chances for both teams!

Phans of Philly did a trip to the Garden a few years ago, and it was a great experience. We had a pre-game rooftop party directly across the street from the Garden. We will be doing the same exact thing this time around, but we expect it to be bigger and better!!

From the party we will walk directly across the street into Madison Square Garden for the SOLD OUT Flyers vs Rangers game at 7:30 PM. Demand for tickets is high, and pairs of tickets on Stub Hub start at $160 per ticket! They will only go higher if playoffs are on the line! We were able to secure a large block of tickets though, so all of the Flyers fans will be sitting together! The seats are in the newly renovated West Balcony which has an awesome view of the game.

We are putting a cap on this trip, and it will be extremely limited! Once we sell out we will not be adding anymore spots. So we encourage you to at least get your half deposit in sooner than later, so you don’t miss out on the fun!!

*THIS TRIP WILL BE EXTREMELY LIMITED, AND ONCE WE SELL OUT WE WILL NOT BE ADDING ANYMORE SPOTS*

*Deposits and any payments paid towards the trip are non-refundable once they are made.*

*THE QUANTITY BOX IS FOR THE NUMBER OF DEPOSITS/PEOPLE YOU WILL BE PAYING FOR. PLEASE LET ME KNOW IF YOU ARE WITH A GROUP, AND YOU PLAN ON PAYING SEPARATE. JUST INPUT THE TRAVELER NAMES IN THE BLANK BOX BELOW*

NO BUS PACKAGE BELOW

Book a trip today! Email joe@phansofphilly.com with any questions
© Phans Of Philly 2017 | All Rights Reserved